West Kent is alive and well on the arts and culture front! From beautifully designed smaller galleries to large arts festivals, the area puts on a show. There are at least ten publicly accessible contemporary galleries, including artist-run Kaleidoscope Gallery in Sevenoaks, and a wealth of artists and clubs which stage exhibitions.  Many studios open their doors in June as part of Art in June.

Inspiring public art can be found in the dreamy grounds of Riverhill Himalayan Garden (the owners are keen collectors) and masterpieces can be tracked down in the many National Trust properties in the region.

There are beautiful music venues like the award-winning Pamoja Hall in Sevenoaks School, and stunning churches where classical music festivals take place.  And keep an eye out for fun contemporary festivals such as Rhythm in Oaks, the Sevenoaks Summer Festival and many popular gigs in Westerham.  With dozens of stages in pub venues too, you are spoilt for choice.

The National Trust: Knole is not only one of Britain’s most important and complete historic homes but it also has an internationally important art collection, with paintings by Reynolds, Gainsborough, Van Dyck, Lely and Kneller. There are also examples of extraordinary 17th-century state furniture, including three state beds and a set of silver furniture, one of only three major sets to survive in England; and the original manuscript of Virginia Woolf’s ‘Orlando’, inscribed by her to Vita Sackville-West, and presented in turn to the Trust by her son Nigel Nicolson (1917-2004). The Conservation Studio at Knole is restoring the 100 most precious items in the National Trust collection – thanks to a large gift from American supporters – with visitors able to view the talented work of the in-situ conservationists for free.

The studio at National Trust: Chartwell has the UK’s largest collection of paintings by the former Prime Minister Winston Churchill, including one nearing completion, as if he had just stepped out for a moment. Enjoy seeing his artwork up close with a state-of-the-art ‘touch wall’ screen at the studio.

Other art work: A connoisseur of stained glass art work (or anyone) will enjoy visiting the Edward Burne-Jones windows in two churches within the District – at St Peter and St Paul’s in Shoreham (Kent) and one from the ‘William Morris studio after a design by Burne-Jones’ at the church in Westerham, St Mary and the Virgin. Henry Holiday, an artist who was part of the Pre-Raphaelite movement, designed another window in St Mary. Laurence Lee, the artist who created stained glass windows at Coventry and Southward Cathedrals was also responsible for a window at St John the Baptist Church in Penshurst.

Architecture: Luminary architect Edwin Lutyens designed the Otford Church Hall in Otford as a favour for his brother, resident vicar in the village at the time. Architect George Devey designed more recent elements of Penshurst Place, a forerunner of the Arts and Crafts movement. 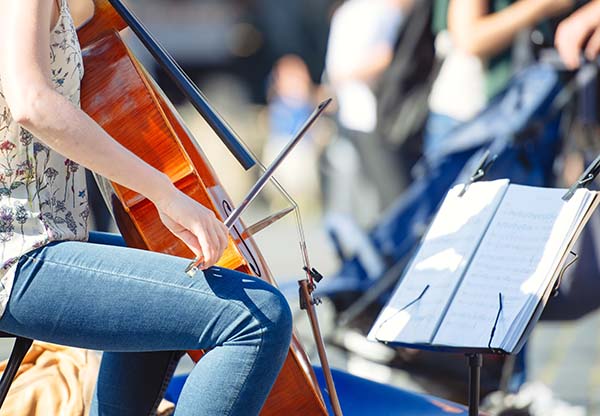 Music: For the music lovers among you, there are plenty of music venues, from cosy pubs like the Three Horseshoes in Knockholt which has regular jazz and blues evenings, to larger concerts and gigs put on by the Listening Room Agency. In the summer months, Stonepitts Farm offers Thursday evening gigs amongst the strawberry fields, combining fruit picking with great music performed on the back of a tractor trailer. St Edith’s Folk promotes a wide range of talented folk artists, performing in the charming St Edith’s Hall in Kemsing and in other venues nearby. The Stag in Sevenoaks draws big crowds for established musicians, jazz groups, concert performances, opera and entertaining cover bands too. Classical music can be enjoyed here as well as at the award-winning 2010 building The Space at Sevenoaks School, an exceptional performing arts space in the heart of the town, with the world-class acoustic Pamoja Hall as the main stage. The Ship Theatre at Walthamstow Hall in Sevenoaks also stages the Three Arts Festival and a mix of great standalone performances.

Festivals: One of more enjoyable aspects of living in the area is the variety of festivals and fetes which take place, including the more cerebral literary festivals at Sevenoaks, Penshurst and Chiddingstone (with internationally known writers coming to give talks). The quirky Camp Wildfire and Camp Kindling (from the same family) take place in the historic woodland near St Clere Estate, and there are plenty of food and drink festivals with some arts on the side to be discovered. The Shoreham Midsummer Festival at the Quadrangle brings small-scale alternative theatre and music to an idyllic rural setting. And of course there’s Hever Festival, with plays performed near the lake, where you can stroll among the roses before performances.